Why should you listen to my playlists?

Because I care. I care deeply about music in every form and I have done so since my somewhat musically deprived childhood.

Mom and Dad had a few old jazz records they’d play for their cocktail parties. Eventually they updated to Stan Getz, and would spin a little Tijuana Brass when they started their Margarita phase (which actually never ended, and by the way my Dad made a righteous Margarita.)  Beyond that, they possessed some Bob Newhart comedy records, the obligatory Christmas compilations and one, just one, classical record - Tchaikovsky’s Russian Dances.  I’d put on my fur cossack hat and gyre around the living room when otherwise bored, but that wore thin when I hit 13 - about the same time I gravitated out of the little white cotton socks I wore with my patent leather flats.

In fact my only source of classical music was in elementary school where we were treated to twice yearly performances by the small symphony orchestra of one Dr. Zipper. (Hmmm, I now wonder - was he sire to the Squirrel Nut Zippers? Certainly his brand of classical music would make you swerve to Swing.) Anyhow, I kid you not, Dr. Zipper conducted just like his name.  Very zipped up. He sported a teeny John Waters mustache, perky bow-tie, quasi-zoot suits and tightly zipped little smile. Every time he lifted his baton his whole body would follow and he’d rise up on his toes ever so slightly.  Needless to say, we’d all snicker as he bobbed up and down on his tiny conductor’s box. And I don’t think any of that potentially transcendental music penetrated our smart-assed little heads.

My only other conduit for tunes was a sweet little pink box with an antenna - my first transistor radio.  WLS radio, out of Chicago, brought a bit of the big wide world home to me. Taught me how to dance, taught me about the pain and longing of romance (Jeez, did I really want to grow up?) If there was one song that sank into my young psyche, it was probably The Miracles’ ‘You Really Got a Hold on Me’, which gave me my first taste of something deeper and wilder than I could ever find in the emotionally arid terrain of the suburbs.  But I soaked it all in - from Chubby Checkers to the Drifters to The Four Seasons and Leslie Gore (although I thought she was really dumb for deciding to cry at her own party.)

It was on WLS where I first heard the Beatles, circa 1963.  I actually wound up at Shea Stadium, just barely a teen, for their first US concert in 1964, guest of an older cousin. We were rather high up in the stands, which wouldn’t have been such an issue but for the wall of sound emitted by the phalanx of caterwauling girls that separated me from the Liverpudlians. I was incensed and repulsed by their behavior - quite irritable to be associated to them by gender.  But I was an instant fan and to this day, when cruising through my library of their songs, believe that almost everything they wrote and performed was some kind of channeling of the divine. 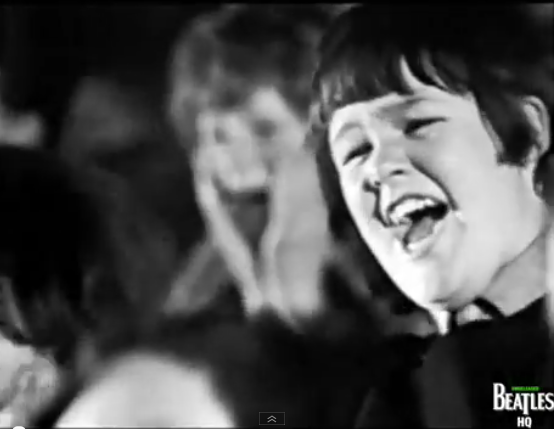 Oh, I almost forgot the sweet baby Grand upon which, at 7, I began lessons which continued until I was 14. My mother had inherited it from her mother and it had been mostly unplayed for years.  I actually loved playing that piano (which my mother eventually painted a soft gleaming black) but my teacher, for most the years I played, had a very mundane sense of what a young girl should play and thus I was saddled with tunes from South Pacific and such. I did learn how to play a decent Sentimental Journey and finally begged for a copy of Alley Cat when I was 12. But by that point my mother had come up with a method to keep me practicing - offering me a dollar for every tune I played flawlessly. Alas, this psychology had the reverse affect and I soon balked at the coercion. Besides, I was now 14 and had just discovered boys.  Needless to say, back then, developing aspirations of becoming a pop musician were less logical then of becoming an astronaut.  (In fact, I later did make an attempt at creating a career as an art rocker, even got 'signed' by an indie label, but that's another story...) 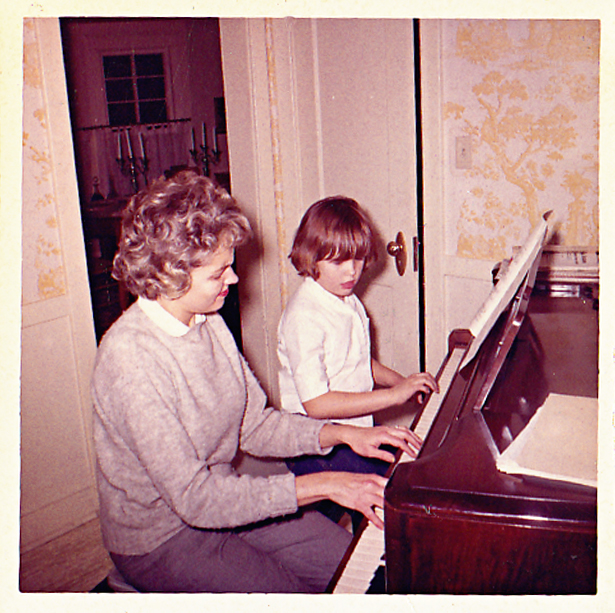 At any rate, what my parents did provide us with in the way of real musical education (which more than anything else, probably cued my ears to what music could be about) was the occasional visit to an old Navy pal of my Dad’s who played a decent trombone. Good old Fred - Irish stock with a beet red face to match and a devilish sense of humor - would get a few other blokes together in his living room and blow. It was alarming what he did with his axe. It was entrancing.  I had no context for it whatsoever but it didn’t really matter that it was some white dude’s version of New Orleans jazz, it was real.  Suffice it to say that when, at the end of my junior year in high school, we left the Chicago suburbs and I found myself in New York City, in the village, I soon discovered what real jazz was.  But more about that later....

Well, all this was only to prime a canvas for what I ultimately have painted and continue to paint for myself and hopefully now for you - a living, world-wide aural landscape of different music.  Every color and shape a different facet of man’s infinite capabilities to express through rhythm and melody, through instrument and voice.  Music is the true proof of man’s grace.

So now, all you have to do is listen. Some stuff may be evocative of the past, hopefully most will be evocative of times and places you’ve never been.  But it’s all good and it’s all beautiful, if your ears are open.

And here's a note on why you should become an rdio member! We spent a lot of time considering the various streaming services and liked rdio's interface the best. They have a free model and a $5 a month model. Cheap by any standards.

Rdio just changed their 'widget' so for any given playlist what you'll see is a few album covers and a PLAY button. Hit PLAY and you'll get 30 second samples and can then pop over to rdio to sign up. This is the only way to see and hear the whole playlist... But I'm telling you, it's so worth it because ~

Once a user of rdio, in the future you can play our playlists as you browse through Realize! You'll need to command click (or whatever you do on PC's) to open a new Realize window, leaving this playlist page open so the playlist continues to play. What a world we live in:)!

Editor's Book Out Now on Amazon!

Where Do We Go From Here?

Can Technology Save Us? Huh?